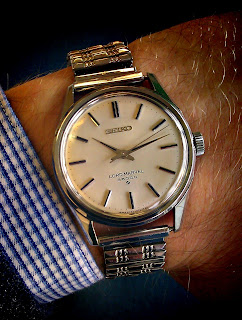 Ahhh... the vintage Seiko obsession continues. Had to send back the chronograph, sadly. One of the hands detached from the bottom sub dial after the first day of wearing it, and while I know it was a vintage piece, the guy who sold it to me had allegedly had it all checked out prior to shipping and I don't feel that a recently serviced watch should have broken in this manner. He was not very friendly about the sending back process either... I had to get ebay involved. The seller refused to work things through with me, asked ebay to decide the case, and when they decided in my favor, he balked and said he wasn't going to respect their decision. Ha! That is so... elementary school. The world has too many people of his caliber in it. Perpetrators of low-level energies. It took a lot of focus not to drop to his substandard energy level. 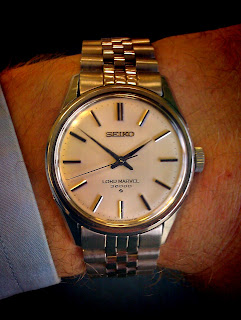 Anyhow, that aside, I found this beauty and had to go for it. Built in September of 1969, this Beautiful Seiko Lord Marvel is in mint condition and functions flawlessly. It came with an expandable band, which I replaced with a Rolex-style jubilee bracelet for now (see the before and after photos). It may ultimately end up with another band entirely. The cool thing about this particular watch, is its movement paved the way for the high end King Seiko and Grand Seiko watches. This Lord Marvel possesses one of the first ever "hi-beat" movements. What that means is, the movement in this watch "beats" 36,000 times per hour, or ticks 10 times per second (When this watch was made, Rolex's best movement beat 19,800 times per hour or 5.5 times per second, and to this day their best tops out at 28,800 or 8 times per second). This provides for a sweeping second hand so smooth, it looks like a classroom wall clock and ticks so fast it sounds like a flea with a jackhammer. It keeps incredibly accurate time, down to mere seconds per day.

The fact that it has a manual winding movement keeps the watch very thin. I love its simplicity: no date window, stick markers, and a slightly off-white dial that most closely resembles the surface of a pearl. Until I can get a King Seiko or Grand Seiko, this lovely watch is a testament to the incredibly high-quality construction of the Seiko watch family and I'm honored to own it. I can literally just sit and stare at the eerily smooth sweeping second hand and my body begins to relax. The one in the video is not mine, but watch this video (above) of a similar Lord Marvel in action. Now that's a sweeping second hand. Freakin' awesome!

P.W.
I am a spiritual being going through a human evolution.